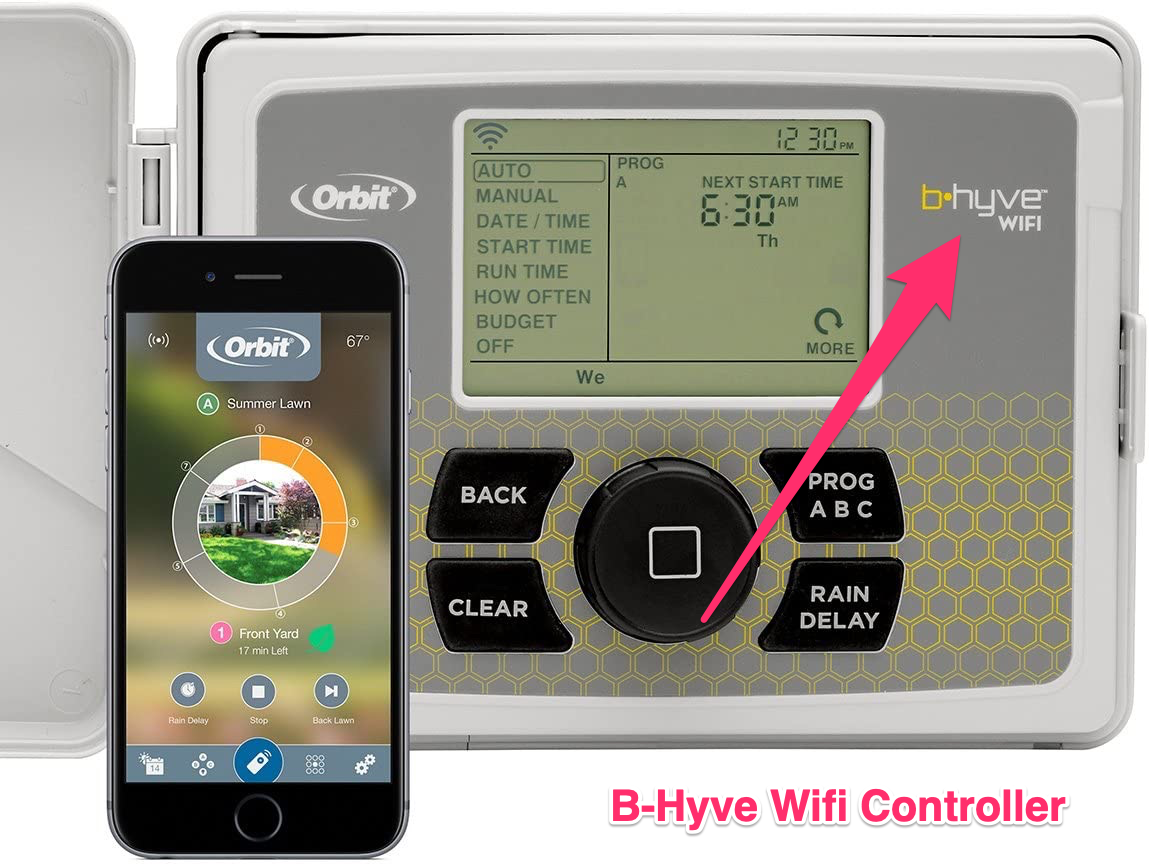 Putting in a sprinkler system was one of the smartest things you ever did, wasn’t it?

No more dragging around hoses, setting up sprinklers, or asking the neighbor to water when you’re out of town.

If you want more control over your sprinkling schedule, the Orbit B-hyve Smart Indoor/Outdoor Irrigation Controller can provide it.

Why be stuck with a fixed schedule that waters at the appointed time, whether it rains or shines, whether the lawn needs it or not.

With the B-hyve controller, you can take command using a product that both works with you and works for you.

Putting Smart in your Smart Yard

Your present system is a great start, but it doesn’t do it all.

Does it sometimes sprinkle during a rainstorm? Is it difficult to change on the fly?

Can you correct your watering schedule when you’re out of town?

To put some smarts into your sprinkling system, all you need is the sprinklers you already have, an AC outlet, wifi, a smartphone, and the B-hyve timer.

Swap out your current controller and swap in the new B-hyve command center.

You don’t even need to place sensors.

You can let the system set up your schedule or configure it yourself.

Water as much as is needed and no more. Save water. Save money.

Here’s how you get started. Hook up and plug in the controller.

Download the B-hyve app to a smart device: an iPhone, iPad, or Android device. You’re ready to take charge. 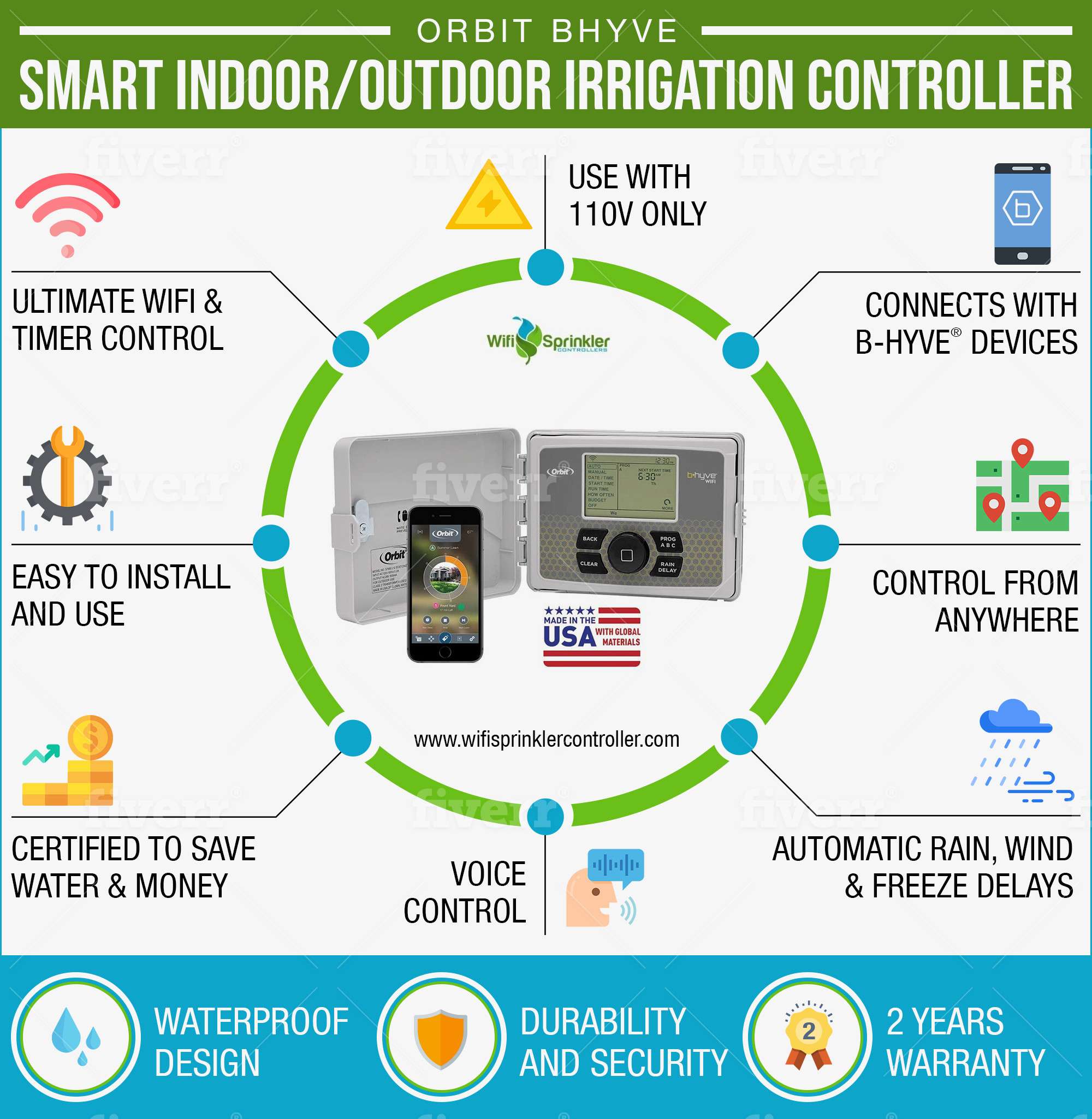 The heart of the system is the app. It’s easy to get started.

It took me literally minutes to go through the whole process.

The app prompts you to step by step. Name your zones.

You can provide more detail if you want, but that’s enough to get started.

The system calculates a watering program for each zone. You can modify it, but it’s a good place to start.

It will make real-time updates in response to changing weather, prevent watering in the rain, increase watering time on hot days, and decrease it on cool ones.

It’s constantly tracking the weather to provide just the right amount of water to your plants and lawn.

While most people find set-up as easy as I did, I’ve heard that’s not always the case.

After all, you’re dealing with several moving parts, including a wifi signal, your phone, and your existing sprinklers.

Some people find the process confusing, and many reports that the Orbit customer service experience isn’t as good as it should be.

Also, the B-hyve controller doesn’t work well with as many smart home systems as some competitors.

You don’t absolutely need a phone. You can set up the system right from the controller.

You’re still able to do anything at any time, but you lose the ability to do it from anywhere. 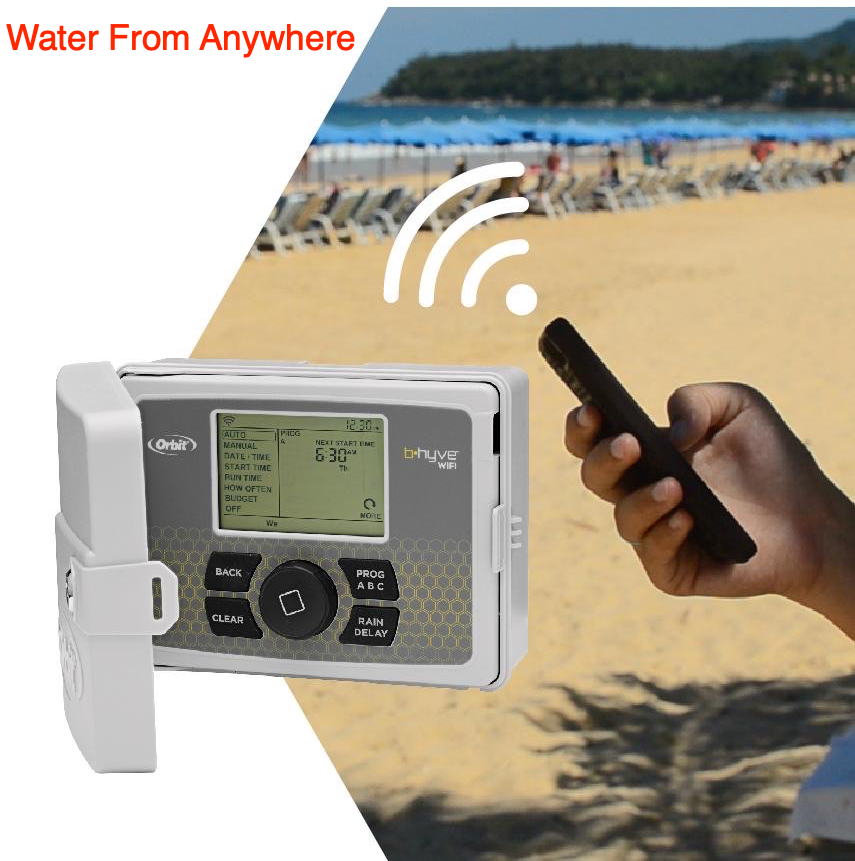 In a sense, a traditional controller will let you water from anywhere.

No matter where you are, it will proceed to do its thing.

Trouble is, it will do exactly its same thing whether you like it or not, and the only way to change it is to be right there at the control unit.

Furthermore, you don’t know what your old-fashioned system is doing if you’re not home to watch it.

It’s reassuring to know that wherever I am, I can see what’s going on.

Wherever my phone is, that’s where the control headquarters is. If I don’t like what’s happening, I can do something about it.

Also, I can control the B-hyve from anywhere in the whole house with my smart assistant.

It’s a kick to say, “Alexa, ask B-hyve to water the lawn,” and watch the sprinklers startup.

The are other advantages to smartphone control. If you’re in the yard troubleshooting a sprinkler problem, you can turn zones on and off with running to the control box.

And don’t forget the fun factor. You can start up the sprinklers just to let the kids splash through them.

Since you can download the app to as many devices as you’d like, there can be multiple users capable of controlling the system. Either you or your housemate can turn the system on and off. Just don’t get into a water fight.

Just about everybody these days has a phone that’s capable of controlling the B-hyve timer, but here are some of the details you need to know.

Android version 4.3 and higher or iOS 8 and higher.

If you’re at home you can connect with Bluetooth 4.2 as well as wifi.

Safety locks to guard your controller.

Made in the USA with global material. 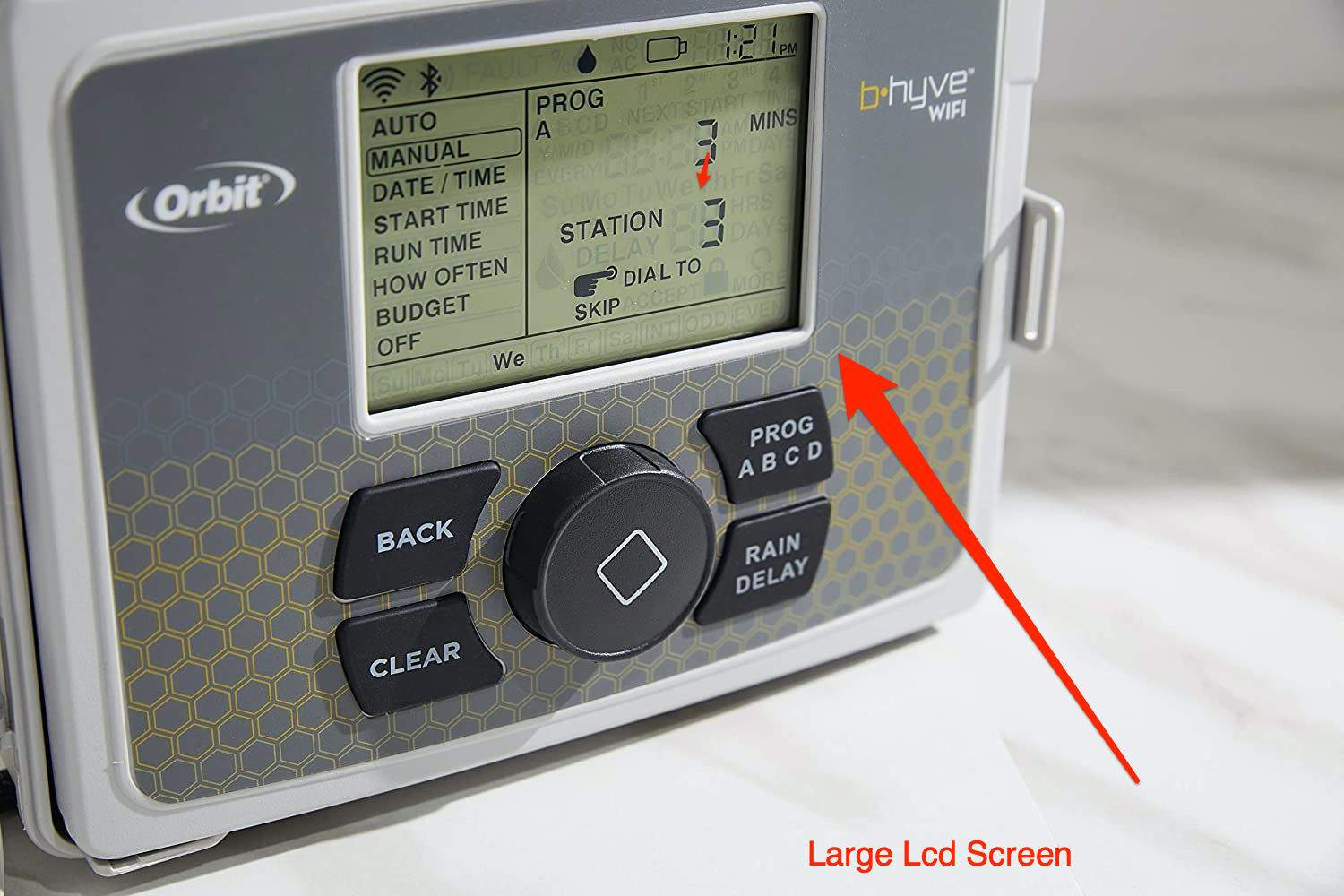 When you open the door of the mounted control unit you’ll find an LCD display screen.

It has a status display that tells you whether it’s connected to wifi, whether AC power is coming in, and an indicator if the battery is low.

You also see the time, which is automatically set if wifi is active.

You can do everything from here. If wifi is down, or if you mislaid your smartphone or your phone is inside hooked up to its charger, that doesn’t mean you’re out of business. You’re still in charge.

The LCD control screen or the smartphone puts you in the driver’s seat.

The name B-hyve suggests a command center, and that’s just what it is.

The B-hyve calendar is one of your summaries.

Tap a day, and see what that day did or will do.

There’s a zone by zone information too.

Tap a zone, and B-hyve tells you the estimated soil moisture based on the weather and when the sprinkler last watered.

You can choose to be alerted when a watering program runs when the system delays watering due to rain and for some other events.

It would be nice to have a little more detail.

For example, you don’t get a full and complete report of which zones are going to run on a given day and for how long.

You can do as much or as little as you want in controlling the watering schedule.

The Smart Watering program will take charge if you let it.

You’ve given it your zone definitions and it’s constantly monitoring the local weather, so you won’t go wrong by just letting it do its thing.

But, if you choose, you might set up an every-other-day schedule, pick the start times you like, or select your watering interval. You can make sure B-hyve doesn’t water your picnic table during your picnic.

It’s possible to manually control some zones and let the controller handle others.

You can set up four programs so there’ll be a Smart Watering program plus three you designed, and you can switch between them however you please.

You’re allowed to determine schedules days and weeks in advance.

There’s a rain delay button. Daily watering can be shut off for a period of one to 32 days.

One especially nice feature is the budgeting system, which is controlled by a slide. Leave it where it is to do 100 percent of the scheduled watering, or decrease the water output to 75 percent or raise it to 125 percent. The system will make the same adjustment across all the zones.

From your phone, you control other B-hyve devices.

You might integrate your B-hyve timer with the Orbit Catch Cups.

It’s possible to manage B-hyve sensors in your entire home such as the B-hyve Smart Flood Sensor, which alerts you to water entering your residence.

This isn’t the fanciest or most sophisticated irrigation controller on the market, but it may well be the best budget model available in smart sprinklers. For the price, it’s hard to beat.

For average homeowners like you and me, it can do pretty much everything we need.

Sure, it could provide a little more information on the controller or phone. And, yes, it would be nice to see better integration with a smart home. I’ve heard that for some people customer service isn’t what it should be.

On the plus side, it would be harder to find an easier smart irrigation controller than the B-hyve.

You can set it up in no time at all, and it’s smart enough to take your initial inputs and build an effective watering schedule.
If you find fault with what the schedule B-hyve calculates, you can always tweak it.

Also, it comes in a 6-zone and a 12-zone version. For most of us, six zones are plenty.

The convenient small size hangs unobtrusively in your garage or on the side of your house.

I expect the B-Hyve Smart Indoor/Outdoor Irrigation Controller will pay for itself in one season just based on water usage.

If you have a local water district rebate available, the payback maybe even quicker.

Orbit Irrigation Products, Inc, located in Bountiful, Utah, United States, is a manufacturer and supplier of irrigation products for residential and commercial markets and has been in business since 1986. It distributes over 2,000 products to 40 countries on five continents.